Are You STILL Using The “Old Model” of Selling? 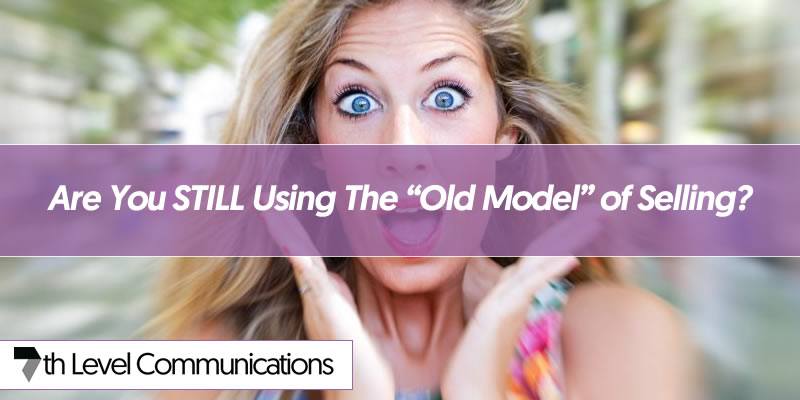 Most salespeople are not even aware that they are still using sales techniques from 50 plus years ago.

If you flick through the pages of business magazines, sales training books and other traditional sales training material, you will likely keep seeing such things as:

Have any of you ever been trained this way?

I know I was when I first got into selling 15 years ago.  In fact, I became very good at it earning almost 300k a year in income at my sales job but could never make more than that no matter how many hours I worked or how many calls I made.

I’ve read hundreds of traditional sales training books, from the “old sales gurus”.  I’ve spent tens of thousands of dollars on their training conferences but no matter what I did, I could never make more than 300k a year as a salesperson.

To me selling was hard, frustrating, stressful and emotional going through all that rejection even though I was making a good living for my family.

It wasn’t until 2006 when I met two mentors of mine that everything changed once they showed me how to Break the “Old Model“ and learn how to sell in what’s being called the “New Economy” we live in today. 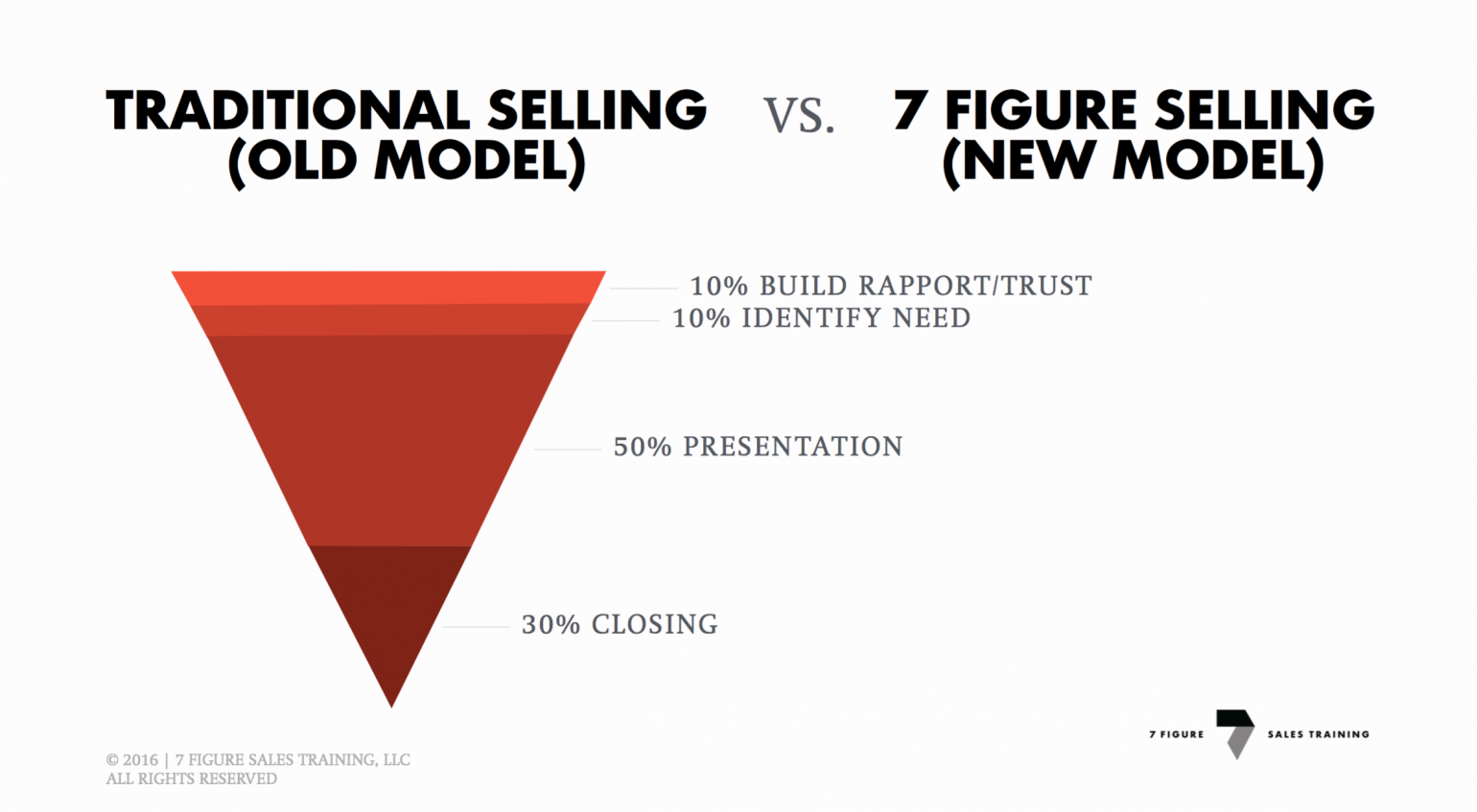 So, in the “Old Model” of selling you will notice that only 10% is about building trust.

The salesperson would come into the office or home of the potential customer and try to find something that they have in common.

Talking about the weather, or who won the football game that week, or maybe they see a picture of the client fishing and they talk about how they like to fish too.  Basically a bunch of BS, that really has nothing to do with why you are there.  Prospects know this as they have heard it 1,000 times before.

After that the next 10% would be about Identifying needs.  The salesperson asks a few generic questions such as this one:

“Can you tell me 2 to 3 problems that you’re experiencing now and what you would like to see happen to fix those problems?”

The prospect would rattle off a few generic problems to the salesperson, with simple logical answers that are just the surface of what is really going on.

Then at that point the salesperson goes into their “sales pitch” or presentation (this is 50% of the “Old Model”) all about the features and benefits of what their product or service can do, how great their company is, and they have the best this and the best that, which every salesperson says.

Then the last 30% of the sale they go in for the close and usually the prospect throws out objections. Then the sales person has to try and overcome those objections, and try to close them again and again.

At the point, the salesperson then starts chasing them to try and convince them to purchase.

Does that sound familiar to you?

So, in the traditional sales model it’s all about getting the sale at the expense of the human relationship with your potential customer.   It’s the salesperson against the customer mentality, like you’re going to war everyday against your prospects, trying to manipulate and win them over for the sale.

For the potential customer do you think this approach is transparent and used on them all the time, by salespeople from all industries?  You bet it is.

Do you think they can feel that from you when you’re making you sales pitch?

And then what happens?

They get defensive, throw out objections and reject you right?

Did you know that Traditional sales techniques contradict everything we know about what it takes to build relationships from behavioral science studies? Wouldn’t it be common sense that selling should be about creating new relationships with potential customers?

Think about it, do you like being pushed into buying something, or talk to someone whose only agenda it to get what they want?  How do you feel when a salesperson uses aggressive closing techniques on you, or try’s to pressure you to buy something from them?

You automatically put up your defensive wall or you withdrawal from them right?  Have you ever considered that your potential customers are doing the same thing to you because of how you are communicating with them or think you have to communicate with them?

The solution to change that would be…….

When you learn how to let go of your need of making the sale and instead focus on whether there is a sale to be made in the first place, your prospects will actually open up to you, and trust you and look at you as a someone that is completely different than any salesperson they have ever dealt with.

They will start to view you as an ‘INSIDER’ that they trust, a “Trusted Authority” rather than an ‘OUTSIDER’, who they view as just another salesperson trying to sell them something.

Once I broke the ‘Old Model’ of selling my income went from about 300k a year to over 2.4 Million a year selling the exact same thing, which is almost a 1000 % increase.

If you are tired of LOSING so many sales and want to discover how to sell in the “New Economy” you can download my FREE resource below.

Jeremy Miner is an internationally recognized sales trainer who has taught thousands of people how to go from just getting average results in selling to becoming a Top 1% earner in their sales industry. Over the years, Jeremy has been asked by thousands of salespeople to train them on how to eliminate rejection, how to connect with their prospects, how to cold call, how to overcome their prospects objections/concerns, and finally how to close more sales without being a pushy, sleazy, disrespected salesperson and learn how to be viewed as the Trusted Authority in their entire market.