How do your Prospects View You? 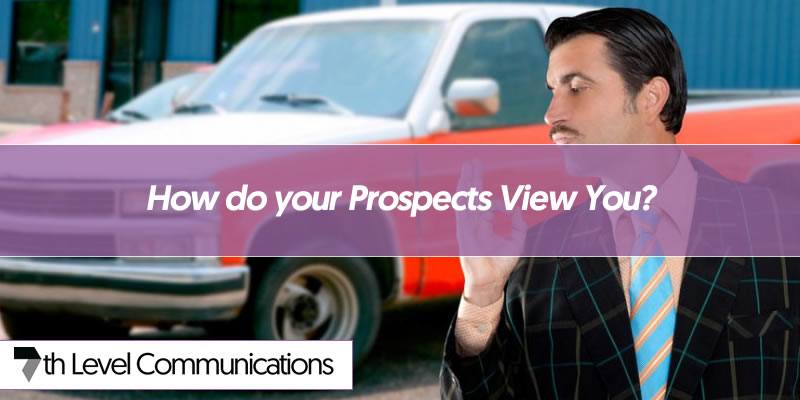 Have you ever wondered how your Potential Customer’s View YOU as a Salesperson?

I was reading in a popular sales publication the other day called, “To Sell Is Human” by Daniel Pink, about a study that was done on consumers a few years ago.  This test group was asked “When you think of ‘sales’ or ‘selling’ what is the first word that pops in your mind?”

This is a graphic representation of the twenty-five adjectives and interjections people offered most frequently when prompted to think of “sale”’ or “selling” with the size of each word showing how many people picked that word.

I listed about half of them below: 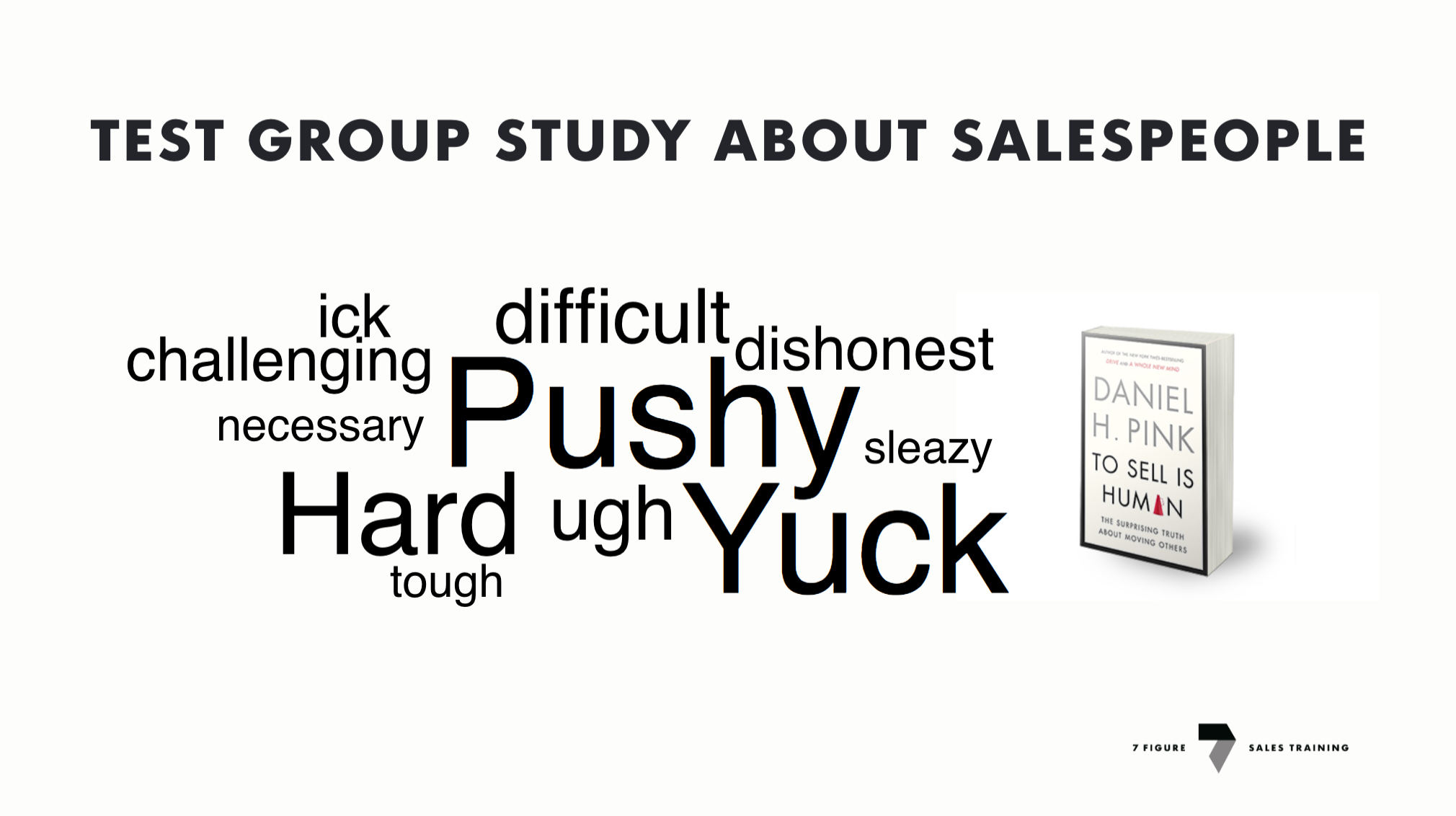 The bigger the font means more people picked that word.  For example “pushy” was the number one word most mentioned or adjective that respondents picked.

Adjectives can reveal people’s attitudes since they often contain an emotional component that nouns lack.   As you can see the emotions from the words “sales” and “selling”’ carry an undeniable negative flavor.  Of the twenty-five most offered words, only five contain anything positive.  Those are, Necessary, Fun, Essential, Important, and Challenging.  The other twenty words are completely negative.

A few reflect people’s discomfort with selling (tough, hard, painful, and difficult), while most reflect their distaste for salespeople.  Words like, “pushy”, and “yuck” are the most used.  Along with others that all suggest deception:  “slimy”, “sleazy”, “dishonest”, “fake”, and “manipulative”.

As you can see selling makes most people uncomfortable and a bit disgusted.

Why? Well most of it has to do with the way we communicate, or think we have to communicate.  The “Traditional selling techniques” taught by the “Old sales gurus” that consumers in our time; for the most part; run the other way from, when it’s used on them.

Now, the second question that was asked to this test group was:  “When you think of “sales” or “selling”, what’s the first picture that comes to mind?”

Take a look at the results for the most popular twenty-five answers: 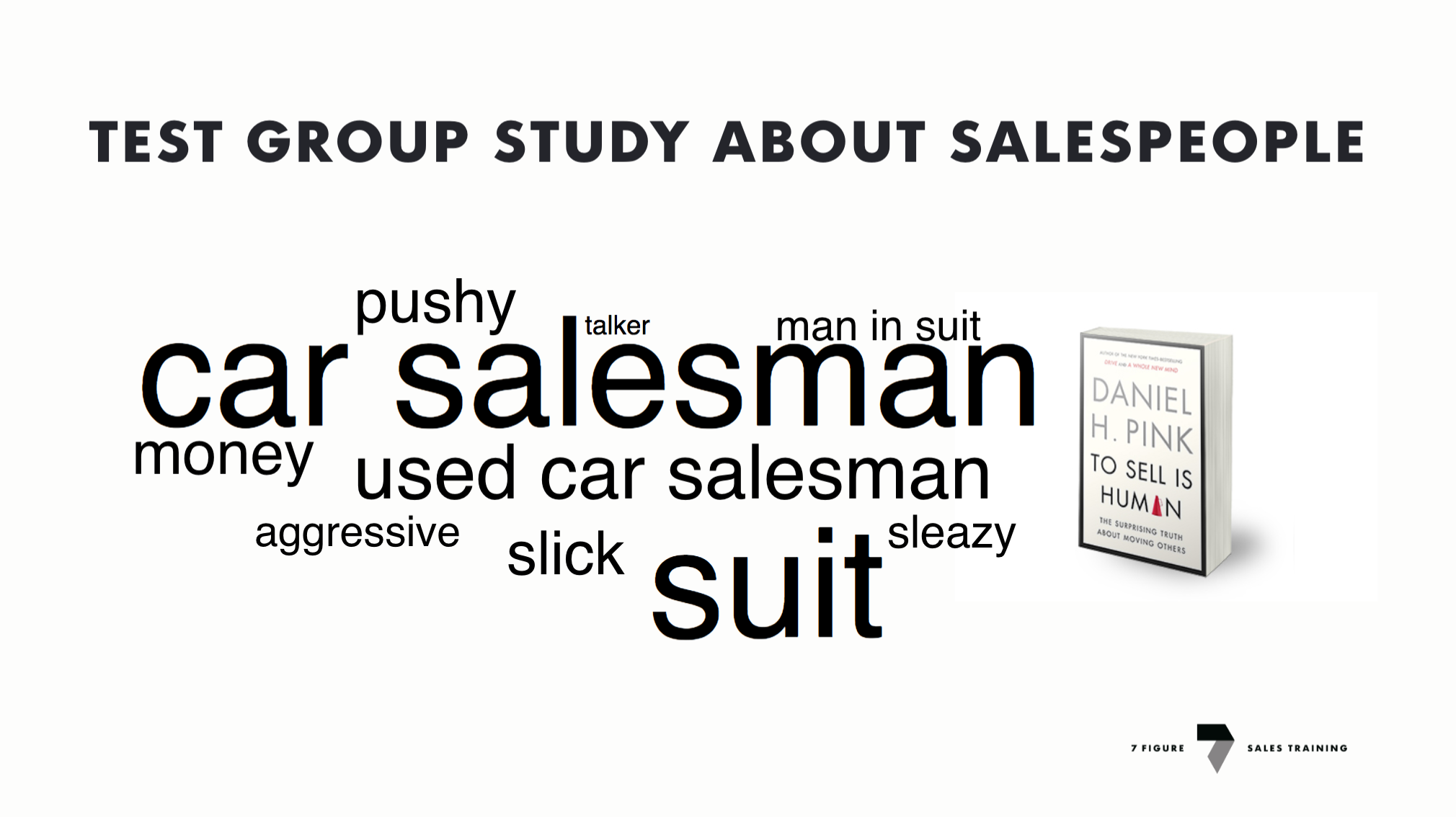 The top five responses, by a very wide margin, were: “car salesman”, “man in a suit”, “used car salesman” and the most troubling one “pushy”.

The respondents also used the term “shark” and many of the test group couldn’t resist offering adjectives such as: “slick”, “annoying” “aggressive” and “sleazy”.

These beliefs about you, the salesperson are embedded in pretty much every prospect you talk to about what you sell–and they believe that is sales is distasteful because it’s deceitful.  It’s what you go up against every single day, every single week, and every month of the year.

So the Question is, how do you go from your prospects viewing you as just another “Pushy” salesperson trying to stuff your solution down their throat, to becoming the “Trusted Authority” in your Entire Market?

It’s quite easy once you understand that Selling has drastically changed even in the last several years in the “New Economy” we live in today.

Below is a video on “Why Selling has Changed” and what you can do about it to get into the Top 1% of All salespeople in your entire industry:

If you are tired of LOSING  so many sales and want to discover how to sell in the “New Economy” we live in today, you can download my FREE resource below.

Jeremy Miner is an internationally recognized sales trainer who has taught thousands of people how to go from just getting average results in selling to becoming a Top 1% earner in their sales industry. Over the years, Jeremy has been asked by thousands of salespeople to train them on how to eliminate rejection, how to connect with their prospects, how to cold call, how to overcome their prospects objections/concerns, and finally how to close more sales without being a pushy, sleazy, disrespected salesperson and learn how to be viewed as the Trusted Authority in their entire market.